Review of A Beautiful Lie Album by 30 Seconds to Mars 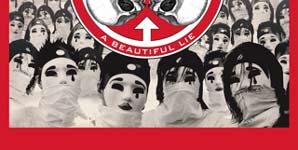 Actors usually make pretty shocking musicians, but Jared Leto seems set to be the exception that tests that rule. With a voice that sounds almost exactly like Bono doing emo, he leads 30 Seconds to Mars to what is a surprisingly good rock Album - think Incubus meets The Cure, with a measure of Linkin Park thrown in for good measure.

Thick with intensely anthemic riffing, arpeggios and epic choruses, A Beautiful Lie hits hard from the start. The band's debut earned a lot of plaudits from the start, and this follow-up has already gone platinum in the US, with more guitar metal than electronic rhythm this time. In fact, the nod is to the excitement of shimmering 80s rock, rather than straight noughties emo. If emo isn't your thing, it's hard to see 30 Seconds to Mars changing your mind. If, however, you like rock, but have always regarded emo as a an unnecessary diversion, this may well be an Album that makes the trip worth your while. Ignore entirely the fact that someone in the band is an actor.