The upcoming 3 Doors Down shows have been cancelled, following Todd Harrell's arrest. 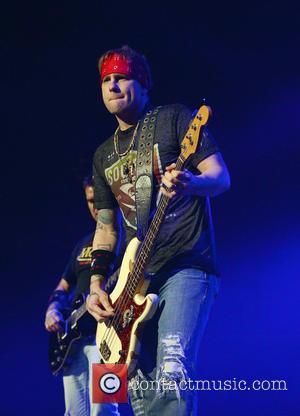 Todd Harrell, the 3 Doors Down bassist, has been released from jail on a hefty $100,000 bond after being charged with vehicular homicide following a fatal car crash in Nashville late on Friday night (April 19, 2013) - he was allegedly under the influence of alcohol, reports E! news.

According to the Nashville Police Department, Harrell was speeding on the I-40 highway in his 2011 Cadillac CTS when he clipped a 2003 Ford F-150 truck, which subsequently struck a guardrail, skidded down an embankment and overturned. The driver of the truck, Paul Howard Shoulders Jr, died a short time later in a nearby hospital.

Musician Harrell told police that he had been drinking strong cider that night and had taken the prescription drugs Lortab and Xanax. He is also charged with bringing controlled substances into a jail after a search tunred up Oxycodone, Xanax and Oxymorphone pills in a plastic bag stuffed in his sock. Following the arrest, 3 Doors Down announced that they are cancelling four upcoming shows and would not resume performing until May 31 in Moscow. The group are renowned for their relentless touring schedules, often performing over 300 shows in a year. The band has shared the stage with the likes of Lynyrd Skynyrd, Megadeth, Nickelback, ZZ Top and Seether. The group has sold 20 million albums worldwide.