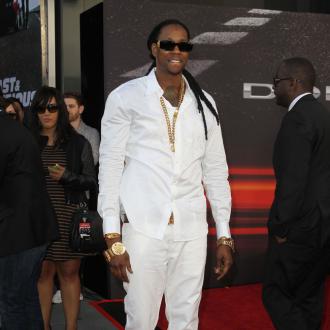 Rapper 2 Chainz has been arrested for suspected drug possession.

The 'No Lie' hitmaker was busted by the police on Tuesday (11.06.13) at Los Angeles International Airport after the 35-year-old hip-hop star was allegedly discovered to be carrying marijuana and a bottle of antihistamine laced with codeine.

According to E! News, airport officials uncovered the illicit substances in the MC's checked baggage at around 1pm when 2 Chainz had already boarded his flight.

The rapper - whose real name is Tauheed Epps - was forcibly removed from the aircraft and escorted to LAPD Pacific Division jail.

Although he was reportedly booked without incident, it hasn't been a good week for the musician.

During a visit to San Francisco over the weekend, 2 Chainz and his six man-strong entourage were robbed at gunpoint by two men.

He had a lucky escape when one of the robbers brandished a gun, firing a shot in the air, before making off with money, cell phones and credit cards belonging to the group.

Nevertheless, 2 Chainz didn't let the incident worry him and took to Twitter to reassure his fans.

He posted: ''we definitely got geeked up in San Fran, best smoke in the world. 2 blessed 2 stress (sic)''.